Most Microsoft Windows users will have stories about how many times a program stops working, or when the mouse seems frozen, or when the entire system seems to freeze or ‘hang’. Some will tell you about the Blue Screen of Death; we’ll save that one for another time! There are ways, depending on what you were doing at the time, to partially recover from a screen that’s frozen, or a program that’s become unresponsive, without having to fully restart or shut down and start Windows. 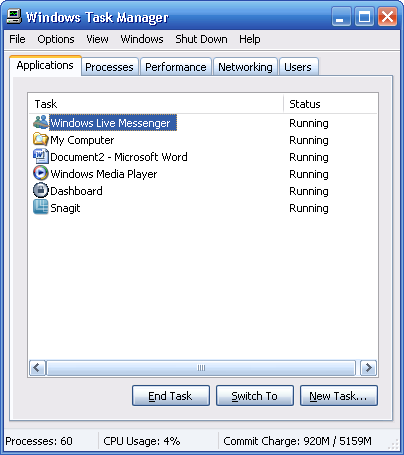 Though it may seem complicated at first, Task Manager allows you to perform the simple task of shutting down an unresponsive program. Today, in Smartphone language, you would call it “killing” an application (though most of the apps we kill in Smartphones are “killed” just to save resources, and not because they’re unresponsive). When Windows Task Manager opens, make sure you see the Applications tab. It will show you all visible applications currently running in Windows (see the screen capture with this tip). The Task (for example, Word or Google Chrome) will be shown in the left column, and its Status in the right column. Look in the Status column for any application or Task that is “Not Responding”. Click on that Task, and then click the End Task button. In many cases, that’s all there is to it, and the application that was giving you a problem will close. All other applications will stay open, and you can continue to work in Windows. If that doesn’t work, even after clicking it once or twice, you can either try clicking on another application and using the Switch To button to get to it, or if you are truly stuck, press and hold the power button in for about 10 seconds. That will re-start the computer.