Once you begin to accumulate a larger number of connections on twitter, you may want to manage your follower accounts.

People judge based on looks.

If you’ve been around the twitter block a few times you will have come across the Love ’em and Leave ’em user. The one you graciously returned a follow, then to discover later they’ve acquired a thousand plus other follows, only to drop you and most everyone else. There’s a reason for this…

Behaviorist Notes: They realize that a portion of the population will assume they are an expert in their field because the numbers are extremely imbalanced.

The down side to this is that the true wealth on twitter is the connection, and there is another part of the population that considers unrequited follows as a statement that the person is not interested in equal conversation and cross promotion.

If you like to converse with your tweeps, then you might want to insure your numbers stay within balance for example 1 follower to 1.1 following. For every thousand people following you try to keep your follows under 1100. This is difficult as you are building your account but once you get over 4 digits, it becomes much easier.

Behaviorist Notes: A quick look at numbers skewed towards following as opposed to followers, suggests the account is trying to accumulate followers as quickly as possible by following anyone and everyone using an auto-follow service.

If you’ve tried to manage your account through twitter.com, you’ve likely discovered it a very time consuming process. There are many services that allow you to do so for free but I’ve found one that I like best. ManageFlitter offers a streamlined free version, but I prefer the paid pro version for easily managing multiple accounts.

Here is a sampling of what ManageFlitter can do. There are some pro features covered here as you’ll see from the tabs on the screenshots. The following does not cover everything that ManageFlitter can do, only the very basics. It appears as though tweet analytics are in beta – an exciting new feature. I have not received any compensation from the company for this post, except a mug and stickers for being ManageFlitters first multi-account user back in October. 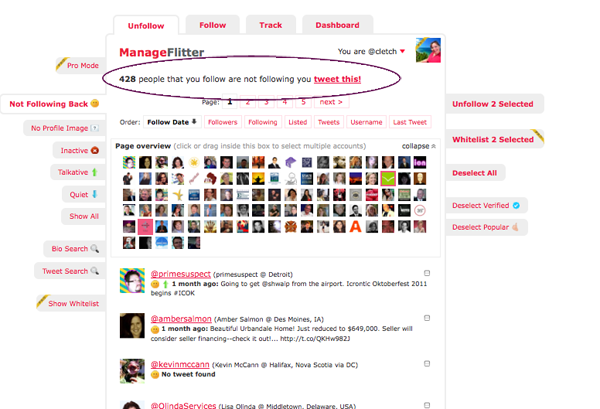 ManageFlitter quickly displays this list ~ 100 accounts per page ~ and allows you to determine if there is anyone that you’d like “whitelist” so you don’t unfollow them by mistake in the future. (Whitelist is a Pro Feature) 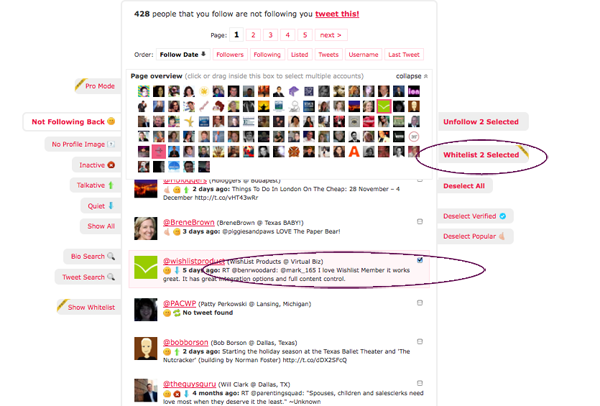 Multiple Unfollows: Rather than having to unfollow each account individually, you are able to select multiple accounts and unfollow a large group. (ManageFlitter does have recommended follow and unfollow notifications in order to comply with Twitter’s Best Practices) 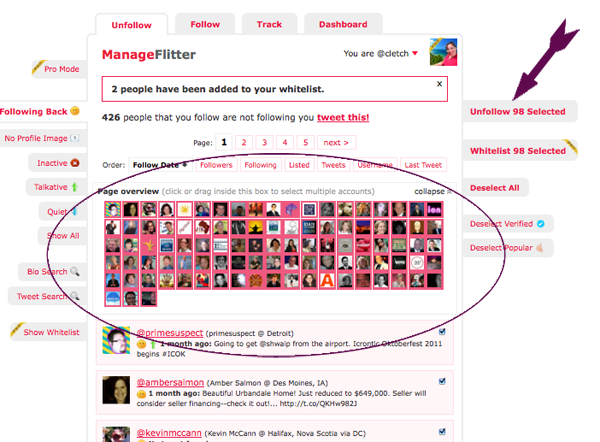 You are also able to choose to unfollow accounts without profile photos, as they tend to be less active users and you can also unfollow people based on how “talkative” or “quiet” they are. You are even able to search and select accounts based on a combination of properties. 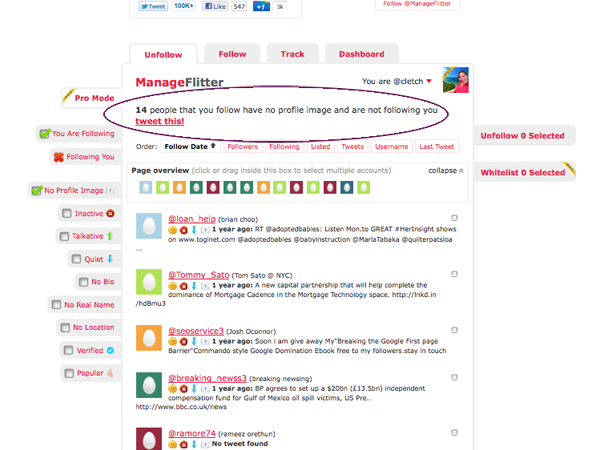 Manageflitter has following services as well. When acquiring multiple followers daily, this system makes following back easy by quickly aggregating those accounts following you, that you’re not following back. 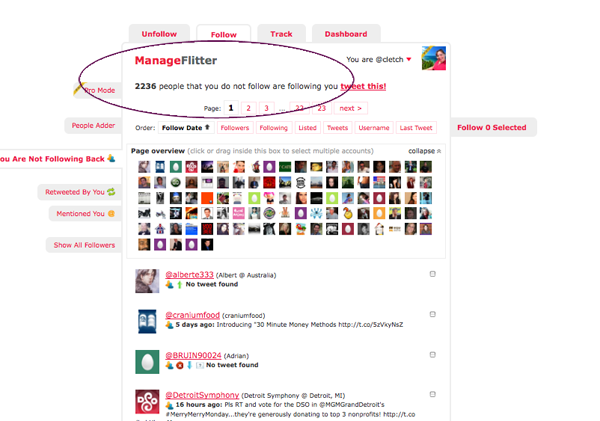 I’ve only scratched the surface of the Manageflitter features, for example, the platform also offers searches and sorting based on criteria such as last tweet and follow date. I highly recommend checking it out, especially if you’re managing multiple twitter accounts – it’s a huge time saver!

If you’ve used ManageFlitter or plan to try it, please let me know what your favorite features are.