I admit: guilty as charged.

Over a six or seven month period in 2011, I lost a truckload of data and information. It took me months to recover or recreate some of it. Other parts were never recovered. The culprit? Me. I had not been properly, or frequently enough, backing up my irreplaceable data. First, my primary notebook computer crashed to the point where, at first, I couldn’t restart it in any way. I had backed up most of the information on it, but at that point, not for several months. I had all the original program CDs and/or product keys for electronic downloads, but as time-consuming as that was, it was the loss of data that hurt the most. Losing my Outlook data file was a killer. Before the crash, I’d spent a huge amount of time creating and organizing folders, and putting contact information in. Some of that was on my phone, but not everything. Later on, a USB started to show signs of failure. (People don’t believe this, but USBs do fail.) It was sudden, and drastic, so I had little time to deal with it. The first thing I did was transfer the usable information to another USB. A ‘good’ one; so I thought. A week later, the new USB suffered a catastrophic failure. My first thought: I’d transferred a virus or some Spyware. That wasn’t the case, but it didn’t matter. The files I’d salvaged from the first USB and put on the second were lost.

Right after this bleak period of data loss, I knew I had to something better—something more—than rely on my pulling out the removable hard drive and backing up more or less manually. My solution was to use an online backup service on the Cloud. 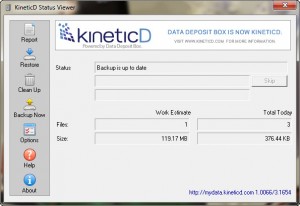 Since then I’ve been using KineticD as my backup provider, while continuing to do more frequent backups to the removable drive. The beauty of KineticD is that it possesses a set of features I couldn’t find at the time anywhere else. (Perhaps other providers offer them at this point.) For one thing, I pay only for the amount of online storage I use. For another, it allows me to not only specify several computers; I can also specify USBs. Bonus! As long I show KineticD where the USBs are (and what they’re called if necessary), it will back them up. And as you might have guessed, this system backs up on the fly, as new files are created (or when it finds new ones). 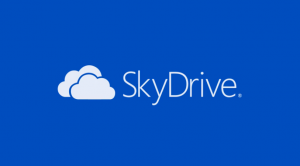 If you don’t have the budget in place for a service like KineticD, or don’t want to mess with CDs, DVDs, or removable drives, the Cloud now offers numerous, and within limits (storage used) free options. There’s SkyDrive, there’s services like Box, or DropBox (affiliate link), and Google has recently entered the fray with Google Drive. I use three of four at the moment. For example, for some writing work I’m doing for a textbook publishing firm, I’ve been using SkyDrive. Fortunately, and partly as a sign of the times, they’ve just adopted Box, and I’m sharing space there with them.

Whatever method or methods you come up with, I can assure you of this: you’ll be a very happy and much relieved camper that one time you think you’ve lost forever your all-important data.