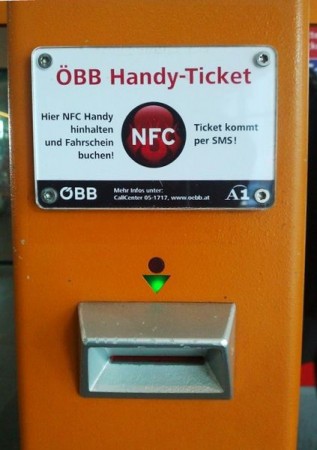 In last week’s post, we introduced you to QR codes, and pointed the way so you can create your own. Very recently, another very promising piece of technology has been making the rounds: it’s called Near Field Communication (NFC), and in short, it allows data to be exchanged by touching two devices together or placing them in close proximity. The list of what you can do now, and what the future holds for NFC is evolving, and it’s very interesting.

In the small town I lived in for a brief time, a local coffee establishment put NFC in place for their coffee club. Other examples of the technology include exchanging electronic business cards, sharing music, and booking reservations. In 2012, Japan Airlines announced they would put NFC in play for boarding passes. BlackBerry offered up their new smartphone in partnership with Toulouse-Blagnac Airport in an experiment where 50 travelers will get to try this process for real.

What do you need to try out NFC? As a consumer, all you need is an NFC-enabled smartphone (check here for a list of them), and another device that also has it. My somewhat dated Galaxy Nexus is NFC-enabled, and most relatively new smartphones also have it.

If you have something to sell, advertise, or even an event requiring registration, NFC may also be for you. Want to know more? Perhaps the best place to visit is http://www.nearfieldcommunication.org/.